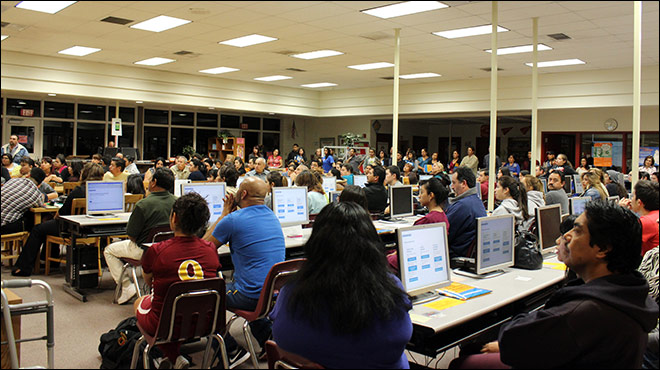 We get inquiries. They come from everywhere — Utah, Louisiana, Missouri, Arkansas, California, Connecticut, Texas and many more. And there is a recurring theme from those in cities, big, mid-sized and small. “How can we get started when we don’t have a major funder?”

It goes against what some believe what Promise programs are, but I like to tell them that they don’t need money in hand to start a program. Folks in Ontario, Calif., are proof. In fact, that photo above is proof. 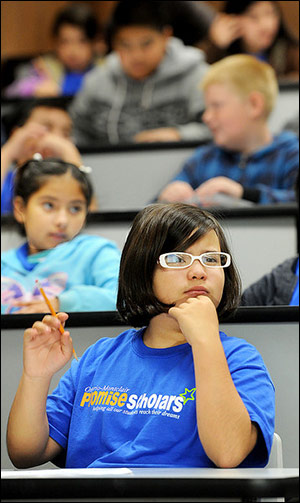 That’s one of the crowded FAFSA Workshops hosted by the Ontario-Montclair School District last year when the school system helped 611 families fill out the federal aid form. Given that 86 percent of the students in the district come from low-income households, that initiative probably generated about $2.5 million in scholar dollars.

But that’s not all that happens in the district. The Ontario-Montclair Promise Scholars program was founded as a three-school pilot program in 1999 with the goal of helping students be successful in a global society by increasing high school completion and college going rates.

The city — located just East of the Los Angeles County line — has been plagued by hopelessness, but the pilot program forged ahead, working with students and families in fifth grade and up to ensure awareness, aspiration and success.

For 10 years the program tracked those students, who had benefitted from existing and modified programs already in place. When James Q. Hammond came to OMSD as the new superintendent in 2010, he looked at the data and, in the name of social and educational justice, expanded the program to every district school.

There had always been a focus on PELL Grants for those eligible and children meeting the prerequisites of the program were guaranteed admission to nearby Chaffey Community College upon graduation, but the Class of 2016 will be the first to have additional need-based tuition assistance and options at other local colleges and universities. Executive Director Leslie Sorensen expects about 700 students to enroll.

The district’s partnership includes the Inland Empire United Way, the City of Ontario, its Chamber of Commerce and an array of businesses, non-profits and citizens. And all 2,200 fifth graders — the Class of 2023 — have a guaranteed place in college (Chaffey Community College, California State University-Bakersfield, California State University-San Bernardino, Cal Poly Pomona or University of La Verne) and years of preparation ahead to fulfill the dream.

You want to guess who’s been watching? The White House, that’s who. Just a few weeks ago, in honor of the celebration of the White House Initiative on Educational Excellence for Hispanics’ 25th anniversary, the Ontario-Montclair Promise Scholars — who are about 90 percent Hispanic — were recognized as one of the nation’s “Bright Spots in Hispanic Education.”

And that was well-earned.