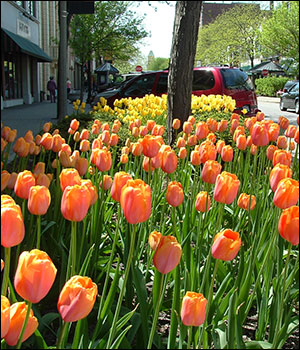 Founded by Dutch Americans, the Holland area has a large percentage of Dutch citizens. And the city is known for the unique combination of tulips and pickles. Each May the town swells for the Tulip Time Festival, which began in 1930. Today six million tulips are planted throughout the city and the event was once named the nation’s best small town festival by Reader’s Digest. As if that isn’t distinction enough, Holland is also home to the world’s largest pickle factory as the H.J. Heinz Company has operated in the same location since 1897. At the height of pickle season, the factory processes more than 1 million pounds of pickles per day. Holland is located on Lake Macatawa, where L. Frank Baum wrote The Wonderful Wizard of Oz while summering.