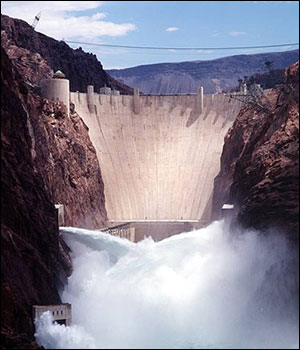 It isn’t easy to focus on Nevada without paying particular attention to Las Vegas. After all, nearly 75 percent of Nevadans live in Clark County, which contains the Vegas metro area. And Vegas defines the state, which became a major tourist destination the establishment of legalized gambling and lenient marriage and divorce proceedings in the 20th century. In 2010, The Economist explained the Nevada was “founded on mining and refounded on sin.” Given that focus, it is easy to understand that Nevada has the most hotel rooms per capita — by far — in the United States and that the tourism industry supplies the state’s largest number of jobs. Elvis Presley tried to explain its lure and excitement in “Viva Las Vegas” more than 50 years ago. Another interesting aspect of the Silver State is that more than 85 percent of state land is managed by the U.S. federal government, including the Hoover Dam, which supplies much of the Southwest with energy. At the time of its construction, it was the tallest and largest producer of hydroelectric power in the world. While that is no longer true, it remains the most well-known dam in the nation. Located about 25 miles southeast of Las Vegas, the Dam was forced to tighten security measures and procedures following the terrorist attacks of 9/11.