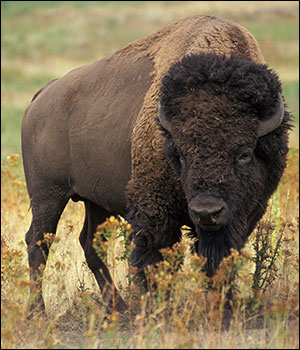 Wyoming has some amazing natural wonders, including the Grand Teton National Park, Yellowstone National Park and Devils Tower National Monument. But the state is a bit light on residents — Less than 600,000 overall and a mere 62,448 in Cheyenne, its capital and largest city. The six million people who visit the state’s parks make up for the lack locals though. And most of those visitors gather in one place — Yellowstone, the first national park in the world. Yellowstone is known for its geothermal activity — like the Old Faithful Geyser — and an abundance of wildlife, including up to 5,000 bison. The bison are such an attraction, one is pictured on the Wyoming state flag. Yellowstone is the only place in the United States where bison — which can weigh as much as a ton — have lived continuously since prehistoric times and its herds are one of the few free of cattle genes. Despite their size, bison can outrun Usain Bolt and can pivot quickly. Don’t call the bison a buffalo. The bison sports a large shoulder hump and a massive head while the buffalo, native to Africa, sports what looks to be a colonial-era wig.