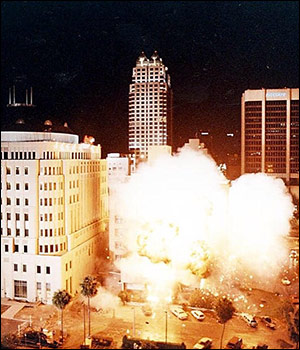 There is so much to write about Orlando, it is hard to start. Well, actually, it starts with the fact that it is among the most-visited cities in the United States, thanks to its famous Walt Disney World Resort which has drawn others attractions.

How big is Disney World? Two Manhattans could fit inside its boundaries.

So all the bigness — the attractions, the weather and the built-in travel industry — also made the city a hub for conventions and conferences. And while the city is a major industrial and hi-tech center, it also became known as “Hollywood East” in the 1990s. Movie studios came to life and major motion picture production became part of the city.

Passenger 57, Jaws 3, My Girl, Parenthood, Dead Presidents, The Waterboy, Monster. They all were filmed in the city, but the biggest moment came in 1991 when Lethal Weapon 3 contracted to blow up City Hall. It was going to be demolished, but the city saved money when offered rights fees to let the movie studio take care of the destruction.

Bill Frederick — then mayor of Orlando — was the policeman who sarcastically clapped and said “Bravo!” to Mel Gibson and Danny Glover after the explosion.

The entire city showed up to watch and FOX News’ Shepard Smith, a local reporter at the time, found that almost every one of them brought a dog.

Already thinking that the hype on the explosion was ridiculous, Smith decided to double down on the inanity and produce a story on the animals. Ridiculed at the station that night, his piece was received warmly and he talked about it at length as his first big break.