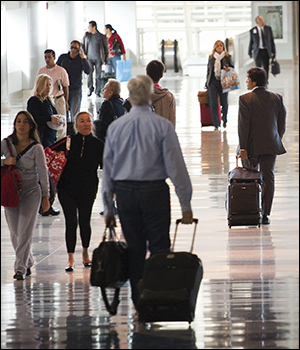 There are so many ways to get to New Haven, just a myriad of options. And we are about to complicate it.

New Haven is just two hours — by train — from both Boston and New York City. People here don’t know whether to hate the Red Sox or the Yankees. Because we are that close, we thought that many folks might want to extend their stay into the weekend, especially given time of year and the events taking place in those two cities. Discover more about some of the extended-stay options as they might help you make travel decisions.

If the lure of Boston and New York City doesn’t move you, the nearest airports are Tweed-New Haven Airport (HVN) and Bradley International Airport (BDL). Tweed is just minutes from the Omni, but will require either car rental or taxi service. Both Lyft and Uber have landed in New Haven as well.

Bradley International serves the Hartford region and is about 50 miles from New Haven. There is a way to get from Hartford to New Haven without a rental car, but it might not be fun-filled. You’d need to take the Bradley Flyer express bus to Hartford’s Union Station and catch either the New Haven-Hartford Express or Megabus to New Haven. CT Limo is also a pricey option.

Once you arrive in New Haven, you really won’t need a car as the conference — along with a slew of dining and entertainment options — will be within a short walk. Because of that, using Amtrak or MetroNorth from the New York City airports is a great option.

Newark Liberty International Airport (EWR) features AirTrain, a monorail which connects to the train station. If your flight arrival matches comfortably with the Amtrak schedule, you can be on a New Haven-bound train (roughly a 90-mile trip) without going outside. An early Amtrak reservation could be less than $50.

Like both John F. Kennedy Airport (JFK) and LaGuardia Airport (LGA), you can also catch an Airport Service bus to Grand Central Station in Manhattan and take MetroNorth to New Haven’s Union Station. The two New York Airports use NY Airport Service while the Newark Airport Express is the shuttle from Jersey. The combination of bus and rail from the airports to New Haven is less than $40. The train trip will be about two hours.

The Amtrak trip from Boston is a bit longer — 2 1/2 hours — but getting from Logan International Airport (BOS) to South Station is simple and free by taking the Silver Line SL1.

Whether you come from the North or the South to the Elm City, once you get to Union Station, no matter how hungry you are, don’t eat Sbarro, Subway or Dunkin Donuts. You will thank us later when you discover that New Haven is also known as Foodie Haven.

Cabs will be plentiful at Union Station and the trip downtown is less than two miles. If you act like you know what you are doing, you can hop the Yale Shuttle to downtown for free.