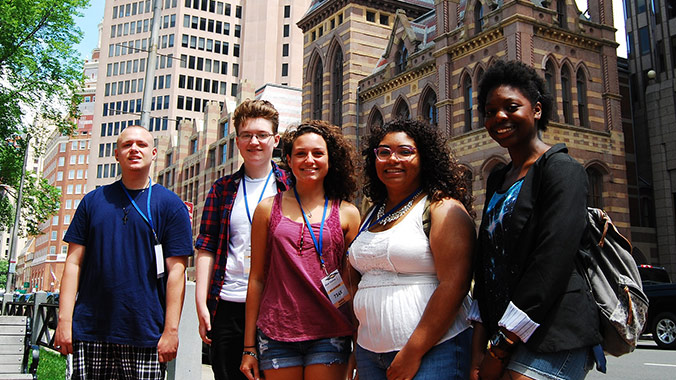 Cities of Promise took an unexpected break this summer as the Promise here in New Haven has been running wild with records being set — by wide margins — for both paid summer internships and Promise recipients. So let’s dive in and get caught up with the movement.

Big news out West, where the place-based scholarship initiative began in Lake County more than 90 years ago. The Oregon Promise — recently signed into law by Gov. Kate Brown — will assist approximately 5,000 students at 17 community colleges starting in the 2016-17 school year. “We like to study things in Oregon. And for the last two years, we have been studying how to make this happen here,” said Democratic State Senator Mark Hass said. “Under the Obama administration, funding for Pell Grants has doubled. It would be smart for Oregon to take advantage of those dollars.” Here is a fact sheet.

That’s not the only place talking Promise. Down in Baltimore, political, education and philanthropic leaders are exploring an $80-million commitment to free college for city students. Say Yes To Education — the George Weiss-founded program that funds initiatives in both Syracuse and Buffalo — has asked Baltimore to submit a proposal to support the strategy. “We’re committed to looking for ways to provide access to more of our young people,” said Mayor Stephanie Rawlings-Blake. “And this process that we’re in now is making sure that Say Yes is the right fit for Baltimore and that Baltimore is the right fit for Say Yes.” An editorial in the Baltimore Sun called the plan a “moon-shot” and asked several questions about deployment.

Don’t forget that down in Greensboro, N.C., officials are raising money to become a Say Yes city as well. Just today, the Community Foundation of Greater Greensboro announced a new $1 million donation, which gives the initiative more than $25 million. That’s within $3 million of the goal.

Other communities have moved to establish a Promise program in recent weeks — from Lowell, Mass., to Grove City, Ohio, to Lancaster, Pa. The folks from Lancaster — who are looking to Pittsburgh for a road map — came to PromiseNet 2014 in New Haven in an exploratory mission.

There is a mixed bag of new from within the existing Promise community. In Kalamazoo, Mich., a paper called “Effects of the Kalamazoo Promise Scholarship on College Enrollment, Persistence and Completion” was released by the W.E. Upjohn Institute for Employment Research. “The question with The Promise has always been: Does it have a large effect? The answer is yes,” co-author Tim Bartik told the Kalamazoo Gazette. “I was actually surprised to see how big of an effect it had, and that it was so clear-cut.” But stories from both the Brookings Institute and the Wall Street Journal called the results “disappointing.” Gotta say, reporting an increase of low-income students in Kalamazoo as evidence of a lack of success is a bit of a stretch. We did have a significant recession since the program launched in 2005 and has become the inspiration for replication across the country.

The editorial board of the Pittsburgh Post-Gazette weighed in on the recent announcement that the Pittsburgh Promise will be reducing its lifetime benefit from $40,000 to $30,000. That switch became necessary when an assessment yielded the news that the program was set to run out of funds in 2022. That has now been backed up to 2028 and extended opportunity for the community to deliver support. “Officials and board members at the Promise must ramp up their efforts to persuade individuals, corporations and foundations to contribute,” wrote the Post-Gazette board.

In Richmond, Calif., where Chevron settlement money has yet to flow into the Richmond Promise, the West Contra Costa school board had a meeting earlier this month and clearly demonstrated that they need to explore and better understand the initiative. One board member called anything but flat funding “a recipe for disaster,” even though other programs have implemented that successfully. Another felt that earlier intervention was a better way to spend the money while failing to understand that motivating and incentivizing students with a longer vision of a successful life provides better outcomes.

The much ballyhooed Tennessee Promise is expected to provide more than $1,000 to students enrolled in community college, but a large swath of the applicants have failed to perform their community service requirement. That hasn’t stopped the Promise from being a game changer across the state as four-year colleges have been working to address the new landscape. Those schools have tweaked recruiting measures — looking at a wider geographical range, encouraging transfer students to apply and even matching the benefits of the Promise itself. “We can’t do all the things we did three years ago,” said Middle Tennessee State University spokesperson Andrew Oppmann. “We’re trying to be a part of the change, not just let the change wash over us.”

And finally, down in Georgia, officials are looking to address the way that the Georgia HOPE Scholarship has become an option for the elite with its 3.7 GPA and 1200 SAT requirements. State representative Stacey Evans is concerned that low-income students who have attended less academically challenging schools are being ignored. “Those are the ones I believe HOPE was intended to help,” she told USA Today. “Those students who are hardworking, studious and smart.”

Those who work with the Promise movement know that it is a game-changer. Cities of Promise is focused on creating awareness to that fact to those who don’t know.