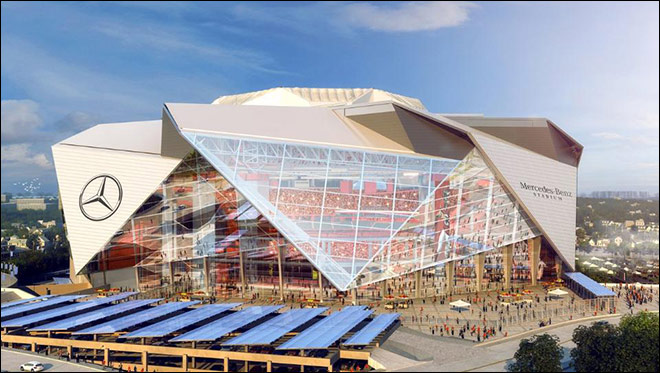 Last month in Atlanta, it was announced that Mercedes Benz had purchased the naming rights to the new football stadium which will replace the 23-year-old Georgia Dome in 2017.

Perhaps the most intriguing thing about the naming agreement was its length of term. It will expire in 2042. If recent history is a guide, that will be about the time that the stadium — despite this cool fly-through — will be imploded. Washington Redskins’ owner Daniel Snyder is, in fact, talking about a new stadium even though FedEx Field just turned 18.

Maybe I shouldn’t pick on Atlanta, because as Richard Florida notes, it could just as well be Dallas or Minneapolis or Buffalo or Cleveland or the Bay Area.

But there is something special about taxpayers footing $600 million in the construction of this new stadium for the mighty Atlanta Falcons, a team that has won 44 percent of its games all-time and has such a notable “Ring of Honor” with the likes of Steve Bartkowski, William Andrews, Gerald Riggs, Jeff Van Note, Jessie Tuggle, Tommy Nobis, Mike Kenn, Claude Humphrey and Deion Sanders. Let’s call them “Neon and the Eight Who’s?”

Yes, $600 million… for a stadium that will likely last 25 years. What is a building’s legacy once it is demolished? Memories?

Is it possible to use this opportunity to float an idea that would truly leave a lasting legacy?

The person getting the most from the taxpayers’ $600 million is Falcons’ owner Arthur Blank, the Home Depot co-founder who is worth about $3 billion. He has also founded the Atlanta United FC soccer team, which will use the Mercedes-Benz Stadium until its inevitable demise.

The 72-year-old Blank signed the “Giving Pledge” in 2012, thus committing to give away at least half of his fortune someday.

Here’s a start. If he developed a city-wide Atlanta Promise program, beginning in 2017, which — in combination with federal financial aid — made college affordable at in-state institutions for every city high school graduate with a 2.5 grade-point average, it would take more than 25 years to spend $500 million (which is less than 20 percent of Blank’s assets).

It’s pretty simple — changing an academic culture by incentivizing and investing in its people would provide a double benefit for the city and the Falcons. After all, a Promise program could substantially increase the number of residents who could afford a visit to the stadium.