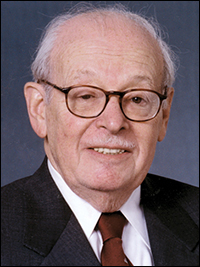 Born to immigrant parents, Lang attended public schools in New York City before accepting a scholarship to Swarthmore College in suburban Philadelphia at the age of 15. He earned a degree in economics there and add a master’s degree from the Columbia Business School in 1940.

In the early 1950s, Lang founded REFAC Technology Development Corporation, which would hold a variety of patents from ATMs to credit card verification systems, from VCRs and camcorders to bar code scanners.

Yet his life’s work presented itself, by accident, at the age of 62 when he returned to his elementary school in East Harlem — P.S. 121 — to deliver a speech to honor the graduation of 61 sixth-graders. His words were not going to be unique. He planned to tell the students that if they worked diligently they would be successful, just like him. He later called it “the usual commencement banalities.”

But then something happened. An off-the-cuff remark by the school principal, who told Lang that 75 percent of the students he was about to address wouldn’t graduate high school.

Minutes later, Lang found himself making a promise to every mortar-board wearing student. Stay in high school and graduate and your college tuition will be covered. As he delivered his impromptu speech, he found his stride by channeling a famous, significantly impromptu speech. In telling the class about the March on Washington, highlighted by Dr. Martin Luther King Jr.’s “I Have A Dream” speech, he urged them to dream. “You need a dream to get on with the next big passage in life.”

Those students weren’t sure if Lang’s promise was serious, but his hiring a young assistant to oversee operations and provide assistance unavailable at their schools convinced them. Students told reporters that the promise incentivized them to stay in school and follow their college dreams.

What became the I Have A Dream Foundation reported that 90 percent of those students graduated from high school and 60 percent would pursue post-secondary work. One of those students, Alma Ceballos, did graduate from college. Her son recently followed in her footsteps, earning a B.A. as well.

“Before Mr. Lang came into my life I was struggling in school,” she said. But with mentorship, tutoring and new motivation, her grades vastly improved within a year. Before long she was the valedictorian of her class. “[The promise] empowered me.”

Soon Lang was building multi-city support for his grade- and class-based model. In 1994, the Yale University Class of 1956 joined local businesses and civic leaders to support a New Haven chapter of I Have A Dream, adopting a class of 56 fourth-graders at the East Rock Community School.

He has made large donations to his alma mater, Swarthmore College, and the New School’s undergraduate liberal arts college is named “Eugene Lang College.” The Eugene M. Lang Center for Entrepreneurship makes its home at the Columbia Business School. He also founded Project Pericles, which has grown into a vibrant consortium of liberal arts colleges and universities promoting civic engagement in high education.

In 1996 he was awarded the Presidential Medal of Freedom by President Bill Clinton and now his educational philanthropy has bestowed more than $150 million and earned him nearly 40 honorary degrees, including one from Yale University.