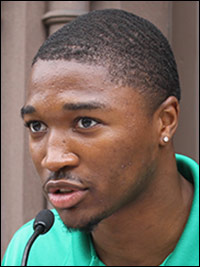 James Baker-Howard — a rising senior at Central Connecticut State University, where he will be a New Haven Promise ambassador this school year — has been serving to engage New Haven’s youth for some time. As the Director of New Haven’s Youth Conservation Corps, he oversees a team of students who are fostering energy awareness among the city’s young people.

Baker-Howard, who worked on Mayor Harp’s election team, has been called the poster child of New Haven’s Youth@Work initiative, which he served three times before landing a post in the city’s youth services bureau. A communications major at Central, he is considering attending business school as a post-graduate.

“I think New Haven is definitely becoming a better place with a new foundation — New Haven Promise — both connecting and growing the number of elite students in the City,” said Baker-Howard. “Most of us will be coming back to New Haven, where those connections will grow even more. The future? It looks tremendous.”