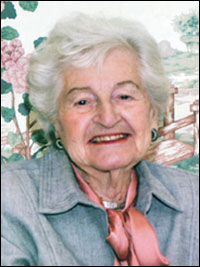 When Ruth Nadel led a small group of funders who doled out nine $100 book awards to college-bound students in 1963, she couldn’t have envisioned the result. Now the Scholarship Foundation of Santa Barbara — of which she was the first president of the board — awards several million dollars each year to several thousand Santa Barbara County students.

The organization — now tagged as the largest community-based scholarship program in the U.S. — is also rated as one of the nation’s best nonprofits.

A member of the first class at the City University of New York’s Baruch College that admitted women, she received her bachelor’s degree in business administration and later earned her master’s in education. She became a teacher, but eventually elected to become a stay-at-home mother to four boys. That hardly stopped her from working.

After leading the foundation of the Santa Barbara organization, she was encouraged to apply for a mid-level vacancy in the Department of Labor’s Women’s Bureau. Her unpaid volunteer work was more than enough to land the position in 1968. She’d serve that department until the late 1980s, when she returned to “professional volunteerism” with more roles than one can count.

In 2014, Ruth celebrated her 100th birthday with the Women’s National Democratic Club in Washington, D.C.