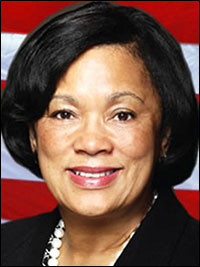 New Haven’s 50th Mayor and first woman to hold the office in its 375-year history, Mayor Harp has delivered an abiding commitment to social justice to a career of public service. Over time she earned a reputation as “the conscience of the Senate” at the Capitol. Her drive for inclusiveness, equality, and integrity is the byproduct of resonant, across-the-board life experiences.

Mayor Harp was raised in Salt Lake City, the youngest of six children; an African-American Baptist in a primarily white, almost universally Mormon community. Both of her parents worked to support the family. Her mother was a Teamster and worked for Greyhound Bus Lines while her father worked for the Santa Fe Railroad.

Her work ethic is a function of lessons learned from her parents. In the 1960s, Mayor Harp moved to the south side of Chicago to attend college. She earned a degree and began working for the American Society of Planning Officials. Her lifelong interest in urban planning and how cities work can be traced to that first job. From there, Harp was recruited to study at Yale’s School of Architecture where she earned a Master’s degree.

One of the early lessons about the rewards of activism she learned was the result of a social justice matter when she worked — coincidentally — for the City of New Haven. Harp helped organize AFSCME Local 3144, a management union, and she became the Human Resources Department’s first union steward. The Mayor’s public service in elected office began, first as a member of New Haven’s Board of Aldermen, and then, for the past 20 years, as Senator for the 10th District.

Among her signature issues have been maximizing opportunity for each individual student through public education and job creation and economic development so city residents can enjoy the rewards and responsibilities of productive engagement. Then-Senator Harp co-chaired the state’s Achievement Gap Task Force, created to address the undeniable disparity in educational access and performance.

Mayor Harp serves on the Board of Directors for New Haven Promise.