Earlier this month at the national PromiseNet conference in Kalamazoo, Mich., there was a lot of discussion of fundraising for Promise scholarship programs.

How do you set an appropriate fundraising goal? What is the best way to attract unrestricted gifts for program management? Are matching grants a thing of the past? Is there a way to build a sustainable and reliable source of funding through creative taxation? What is the best ‘pitch’ to lock down a major funder?

Of course, all of those are important questions, particularly for a program just getting off the ground, but there might be even more important initiatives to undertake to get a campaign off the ground or extend the shelf life of a movement as it builds capacity.

I’m going to call it the “Cornerstones of College Affordability.” If you don’t have a dime for scholarships, you can still create dollars for scholars through maximizing pre-existing sources. And if you have scholarship dollars, there are ways to leverage them to make sure that students get up to three times as much money from sources other than the Promise dollars.

Here are the five cornerstones:

1. Federal aid — There is a lot of unclaimed money for low-income students through the Pell Grant program. Students who qualify for Pell can get close to $6,000 annually to cover expenses and many scholarship programs use that as part of the equation in determining a scholarship award. Every program should encourage and assist students and families to complete their FAFSA applications in both accurate and timely fashions.

2. Financial literacy — Those who are first-generation students can find unhappy surprises — not just the hidden costs of college, but also the deadlines for payment. Choosing the right college from the start can make all the difference in getting that diploma. Having access to those who can explain the process and its expectations, even before the selection a school, can help families steer clear of the roughest waters.

3. Institutional aid — Those programs who are forking over checks to colleges have some leverage to create universal benefits for its Promise scholars, particularly if they can demonstrate patterns of increased success in comparison to the broader student body. But you don’t have to wait to begin that conversation. Without question, the earlier students complete applications to college, the stronger the chance they can tap into existing university scholarship pools.

4. Other scholarships — Most places in the U.S. have existing scholarships intended for local students and there are also regional and national award programs as well. The problem is that most students are unaware what is out there. If someone associated with a program can provide resources, the affordability puzzle becomes more complete. There are students who are making college debt-free by taking advantage of multiple opportunities.

5. Paid internships — Not only are students much more likely to find full-time work after college after taking advantage of paid internships while in college, they can also make use of summer work to defray the costs associated with college. Any program that works with the local business community to create such opportunities will produce better results and retain more students after graduation.

No, none of this helps a Promise program with its overhead, but each one helps improve outcomes for students. A promise can mean a lot of things, including the promise to help young people blaze that trail both to and through college. 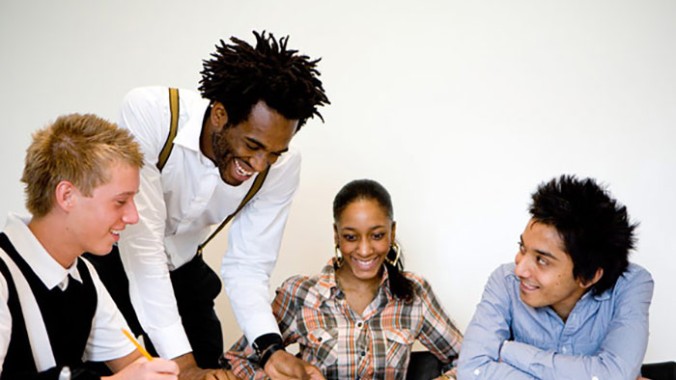 In 2013 I read a story in the New Haven Independent that hit me hard. A young football star at the predominately black Hillhouse High School in New Haven talked about the importance of having African-American male teachers because they could “relate more to the students.”

Yet he was talking in theory. In 14 years as a New Haven Public School student he’d never had a black male teacher. Not one.

Dr. Thomas S. Dee, now a professor of education at Stanford University, concluded a decade ago that students typically learn better from those who share their racial identity. Dr. Dee’s conclusions may not sit well with some or perhaps many. What is evident is that the workforce in position today is falling short of the expectations that we should all have for students today.

New Haven is hardly alone in its workforce disconnect with its students. About five-in-six students are black, Latino or Asian while about four-in-five teachers are white. Garth Harries — the Superintendent of New Haven Schools — told the reporter that the workforce “reflects the applicant pool.” As a result, the district’s teachers are largely white, primarily female, mostly suburban and — if research holds true — substantially “not prepared to deal with the growing number of diverse students in the schools.”

In short, there is an enormous need to broaden the applicant pool and diversify — in race and gender — the educator.

For the Cities of Promise — starting with New Haven, Pittsburgh, Denver, Buffalo, Peoria and Kalamazoo — comes the burning question: “What are your Promise programs going to do about that?”

At a time when fewer and fewer students are interested in studying education in the U.S., it leaves an enormous opportunity for students of color to return to their hometowns and make a huge difference for those sitting in the same classrooms where they had once sat.

As Promise programs not only bridge the transition from high school to college, they often address economic development by fostering opportunities in local businesses for those interested in returning home. Local school districts are always among the leading employers in a city and — working in conjunction with Promise programs and their college partners — there is a perfect opportunity to “hire within” by targeting and recruiting high-potential scholars and enticing them with the possibilities.

Superintendents in the Cities of Promise should never again explain a dearth of minority teachers by saying that it simply “reflects the applicant pool.” They should put some skin in the game to extend opportunities for their own graduates to educate, inspire and transform their current students.

When a city the size of New Haven — roughly 130,000 residents — has an annual school budget nearing a half-billion dollars, it can find a way to make a commitment to minority teachers and its own homegrown pool. And it can surely find a way to transform its hiring practices.

Brett Hoover — who formerly served as the Associate Director of the Ivy League — is a co-founder of Cities of Promise.