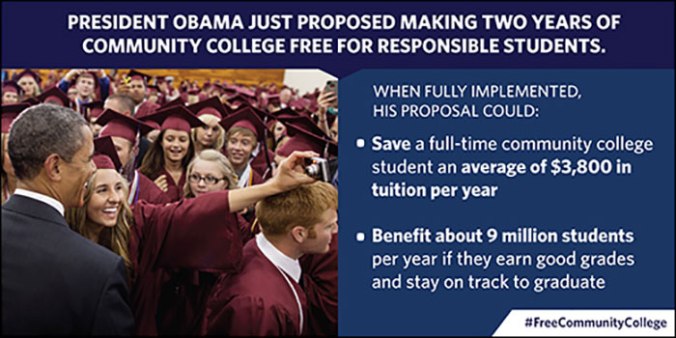 The Promise movement has hit the big time. President Obama is announcing his college affordability program — dubbed America’s College Promise — today in Tennessee and he expects to address it in his State of the Union speech later this month.

The plan sounds very similar to the programs that have been benefitting students in places like Kalamazoo, Pittsburgh, Denver, New Haven, El Dorado, Buffalo and on and on. Students must reach generous eligibility standards to qualify and maintain a level of success to keep the scholarship.

“I’d like to see the first two years of community college free for anybody who is willing to work for it,” President Obama said in a video shot in Air Force One and released by the White House on Thursday night.

“It’s something we can accomplish and something that will train our work force so we can compete with anyone in the world,” he added.

Molly Corbett Broad, president of the American Council on Education, told the Chronicle of Higher Education that the plan “a potential game changer that could encourage millions more students to consider, apply, and enroll in postsecondary education.”

Here at Cities of Promise, we are thrilled that the movement is getting this kind of attention and support. With growing disparities, America needs a more meritocratic approach to address the issues of today and beyond.